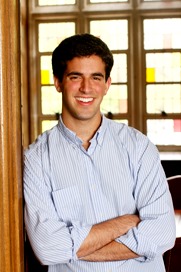 How did you get involved in Rhodes Student Government (RSG)?

My involvement with Student Government began in high school where I was the Commissioner of Community Relations. After becoming accustomed to life at Rhodes towards the end of my freshman year, Matt McCulloch, who at the time was vice president-elect of RSG, really encouraged me to give RSG a shot. Fortunately, with the help of my classmates, I was elected as senator my sophomore year, vice president this past year, and I will proudly be president next year. I’m definitely glad I took Matt’s advice to explore and run for RSG.

What exactly is RSG and what do they do?

RSG represents the interests of Rhodes students to the rest of the administration and campus, including- faculty, staff, trustees, alumni and friends of the college. Our senators work closely with Aramark, Campus Safety, Physical Plant, Barrett Library, and higher administration to ensure that the voice of the student body is heard. We are always striving to improve the campus and, this year, we were able to restructure RSG under Matt’s leadership. It now consists of four committees–academics, student services, communications and student organizations. These changes will help RSG run more efficiently and cover more needs of the student body.

What are your plans for next year as president of RSG?

My main goal is to continue increasing school spirit at Rhodes. President Troutt has stressed the importance of having more campus-wide events so that there can be a greater sense of unity among the student body. This past year, RSG organized two campus-wide events–“The Red Riot” for the football team and “The Cupid Classic” for the basketball team. Students showed up to the game wearing or painted up in red. For the Red Riot, we organized a raffle with the chance to win several gift cards. The proceeds went towards saving the Iberian Lynx, which is the most endangered cat in the world. Next year, I want to make sure we continue to organize school spirit events. After having spoken to an alumnus recently about the matter, I decided that I am going to try to bring back the Rhodes tradition of having a homecoming parade. My vision is to have a float-building competition among the student organizations and Greek houses. I truly believe that an event like this will help establish Lynx pride not just among the students, but among the alumni and the greater city of Memphis.

What sort of impact has RSG had on your time at Rhodes?

I think the biggest impact for me has been the relationships that I have been able to build with many of the administration, especially with (Dean of Students) Carol Casey and (Vice President for Student and Information Services) Bob Johnson. Bob and Carol serve as the RSG advisors and they have helped me mature as a leader by teaching me how to communicate effectively with the administration, follow through with goals, and how to keep other members of RSG on task with our agenda. As president, I look forward to continuing my growth as a leader under their direction.

What advice would you give to the incoming Class of 2015?