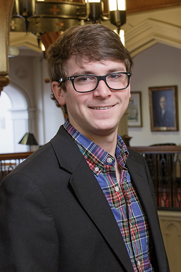 Research interests: I have enjoyed doing research on both the importance and impact of film studies and media literacy for high-school students. By implementing film studies into a high-school classroom and thoroughly researching the topic, I have observed that introducing the analytical value of relatively new mediums (especially film) can speak to students who may either lack in reading ability or who simply enjoy watching films. I plan to continue my research into my career and hope to eventually make a documentary on the subject.

I also really enjoy researching techniques used in the production of horror films, which have always been a passion of mine. By studying the psychological, philosophical, and analytical value of these techniques, I plan to pursue the business of horror filmmaking to some degree or another.

Extracurricular activities: I am an active member of the Rhodes chapter of the Sigma Nu Fraternity, which is very important to me. I also enjoy producing my own music as well as participating in musical collaborations. As a Film Studies/Art major, I enjoy making films outside of class as well as occasional photographic ventures.

Tell the story of how you got to Rhodes College.

My dad actually discovered Rhodes when my older sister was applying to colleges back in 2007. My dad knew that Rhodes would be the perfect fit for me. After only one visit (not even overnight) I knew that I could see myself excelling here. It wasn’t only the liberal arts aspect that reached out to me; it was the Rhodes attitude toward liberal arts. After months of looking at other schools and debating where to go, I finally received my acceptance to Rhodes, paid the deposit, and never looked back.

How have you changed since beginning your studies at Rhodes College?

When I first arrived at Rhodes I was actually interested in pursuing either a Physics or Math major. Shortly after the first semester I decided that I would continue studying math as it came rather naturally for me, and I enjoyed the educational aspect. It wasn’t until the end of my sophomore year that I began to question what I really wanted to do with my education and my life. I had always been interested in making, analyzing, and discussing films, so I figured it was never too late to do what I wanted. I then began the process of switching majors to a self-designed interdisciplinary major in Film Studies and Art. Since then I have found that only good things can come from doing what you enjoy. I have opened doors for my future and truly feel that I am getting the education I had originally wanted.

In what ways will your Rhodes education help you achieve your career goals?

Rhodes has helped by allowing me to create my own major, combining both the analytical and production aspects of film. I have had the opportunity to educate myself about films and make my own, already joining the festival circuit and having my own IMDB page. By currently working on several films, including one with Professor Daggett, I plan on using every opportunity Rhodes offers to further any chance of taking off in the film industry.

What level of involvement have you had outside of Rhodes in the city of Memphis (e.g., public screenings, arts festivals, etc.)?

In the past year I have had the opportunity to be a part of the Indie-Memphis Film Festival, screening a short, experimental documentary of the wild and city life of Memphis. Since this film was out of my element, I created a Directed Inquiry this semester to work on a sci-fi horror film that I hope to submit to Indie-Memphis. I am also setting up a fellowship in the Art Department for documentary film editing. The film I am editing will be a short promotional documentary for a local hip-hop musician. While many of the ways I am involved in the Memphis art community tie back to my studies at Rhodes, I will continue to build up a portfolio and resubmit my favorite pieces to festivals, not only to gain exposure, but to share my vision.