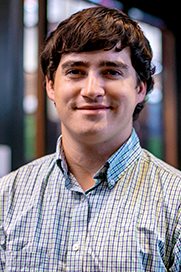 Tell the story of how you got to Rhodes College.

Growing up and going to high school in the Memphis area, I wanted to stay close to home while still attending a school with a very strong academic reputation. Rhodes was the perfect fit, and I have felt at home here since the beginning. The decision was made easier, though, as I got a fairly generous merit aid reward from the school, even without qualifying for need-based aid.

How have you changed since beginning your studies at Rhodes?

I am a much more confident and outgoing person. I’ve developed scholastically, as well, having taken classes such as computer science and accounting that in high school I never imagined I would take. But the biggest change has probably just been my personality. The experiences I’ve had at Rhodes have shown me that if there’s something that I’m not happy with or that I think could be better, I can do something about it. I served for a year on RSG, and we felt there was a need for an academic mentorship program—so we designed a plan, pitched it to the faculty, and it was given a test run. Likewise, I, along with a few other students, felt there was a need for a group that would allow people to explore questions of meaning and purpose from a non-religious perspective; thus, we formed a group to serve that purpose.

You were a charter member of the Rhodes Chapter of Tennessee Intercollegiate State Legislature (TISL), and served as the vice president of legislative affairs this year. Tell us about your involvement with the organization, and how it has related to your academic studies.

Of all the organizations I’ve been a part of at Rhodes, TISL has been the most enjoyable. In high school I did Model UN and Youth Leg, and was hoping to be able to continue doing something like that at Rhodes. While shadowing my state senator, Dolores Gresham, in the spring of my senior year in high school, I met the then governor of TISL, Corey Higdon, who told me that Rhodes did not currently have a delegation, but was in the process of putting one together for the next year. I was able to be involved from almost the very start. Since that time, Rhodes has become a power delegation, winning Best First Year Delegation our first year and then Best Delegation every year since. The best part about my participation in TISL, however, has been that it has allowed me to remain somewhat politically active, even though I am majoring in German.

Tell us about your decision to major in German, and the year you spent abroad studying in Germany. How did that supplement your Rhodes education?

The German language has been nearly an obsession of mine since freshman year of high school. My mom was born in Germany to American parents, who were themselves of German ancestry. My sister and I grew up eating a decent amount of German food, but were never really introduced to the language. In the fall of my freshman year in high school, though, a friend introduced me to the German band Rammstein. Eventually I decided that I wanted to at least have an idea of what they were saying, so I ordered Rosetta Stone, bought a German dictionary, and started teaching myself the language. When looking for colleges, one of my main considerations was study abroad programs, and my final two choices, Washington University in St Louis and Rhodes, both had programs with the University of Tübingen. However, I found out that Rhodes was developing a new program with the University of Koblenz-Landau that would provide students much more assistance in settling in abroad than is normal.

The program, and my year abroad, was absolutely fantastic. My goal was to improve my German and, to do that, I told everyone there that I would rather speak in German than English. The entire first semester I spoke almost only German. While abroad, I was also able to explore Europe. Being a huge fan of the Assassin’s Creed video games, I visited Florence and Rome to retrace the steps of the main character, and spent time in other major European cities like Berlin, Amsterdam, Brussels, Paris, and London, as well. Perhaps the most exciting thing I did while abroad, though, was playing golf at the Old Course at St. Andrews.

The German department at Rhodes was absolutely fantastic when it came to setting up my exchange, especially Dr. Felix Kronenberg, who was the main mover in setting up the program in Landau. It’s a daunting experience trying to take care of the paperwork and planning for study abroad, and I’m not sure I would have been able to do it without the support of the department and Rhodes’ study abroad office.

What are your plans for next year?

Next year I’m planning to do the masters of accounting program at Rhodes. I have always been interested in business, so it is the absolute perfect opportunity to dive into something new. After the accounting masters, I plan to go to law school and then hopefully do something in international business law, where I will have the opportunity to travel the world and actually get paid to do it.